St. Louis photographer bypasses the platform because he can [Platform is where the heart is]

Wait. Let me back up.

Corey Woodruff has been an active and genuine part of the St. Louis photography, music and general-good-goings-on-about-town scene for quite some time. He's one of those people who creates and collaborates by nature, and he saw a chance to create a space that both supported his business and his desire to support and be a part of the creative scene in St. Louis. The manifestation of that natural and genuine desire is to take advantage of an opportunity to "purchase, preserve and convert a historic building into an incredible studio space."

Sounds like the perfect setup for a Kickstarter or an Indiegogo campaign, right? Totally. Or, sounds like something someone with the means and/or the right connections just mentions at happy hour and then makes happen. But Corey's executing on the perfect middle ground.

Corey put together a simple page on his photography site, explaining his goal and his plans to fund it by pre-selling photography sessions for 2014 at a deep discount. After about a day, he's 15% of his way toward his goal of $20,000. 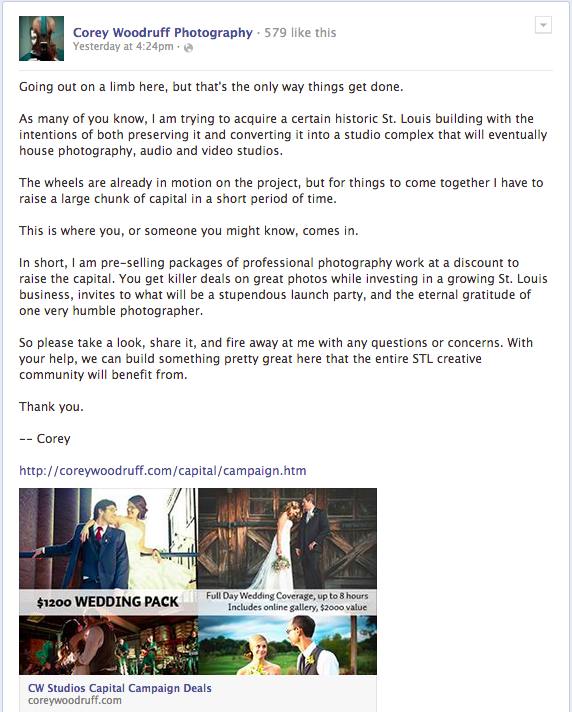 Clients ask me about crowdfunding all the time, but usually at two polar extremes: "magic pill" or "obviously useless." The "magic pill" version is the version where no matter the relevancy, context or quality of the project, crowdfunding is an automatic guarantee of full funding a tons of new exposure. The "totally useless" scenario is the version where despite the relevancy, context or quality of the project, they feel as though they can get just as much funding and new exposure on their own site as they could on a crowdfunding platform.

You'll notice the theme here: a skipping over of the relevancy, context and quality of the project.

Let's look at Corey's project. His project is the next step in his career. In his photography business, his musicianship, his support of general-good-goings-on-about-town. He has an existing network of friends, colleagues, bandmates, past and present clients, etc. who naturally want to see that happen. Because he's a nice, genuine and talented guy. His product (photography) is at the center of his fundraising effort. He's offering a quality product in exchange for money he'd get for that product anyway, but because he's got a time sensitive goal, he's concentrating the ask and offering a discount. He's not asking for a donation or a hand out. He's offering a tangible good.

He doesn't need a crowdfunding platform to frame his story and his effort. His business is one that relies heavily on referral as it stands, so the idea of people spreading the word of a) an opportunity to receive a quality product at a discount; b) support someone with whom they've had a good experience and/or c) just see something cool happen in St. Louis done by someone they trust is a natural.

Crowdfunding platforms are there to give a larger stage and set of tools to projects that might connect with someone on impact or need alone (regardless of relationship) and need to reach beyond their organization or individual's immediate circle to succeed. And setting that up for success has everything to do with the, wait for it... relevancy, context and quality of the project. That is the starting point.

Turns out that Corey's run two successful Kickstarter campaigns in the past (for much smaller amounts). Beyond the logistical differences (no platform fees and eliminating the all-or-nothing framework), he said that while in his Kickstarter campaigns most of his supporters were connected to him, so far in this effort the majority of the participants are people he doesn't know. He said he's gotten about 3-times more shares and reposts than his regular posts. I hypothesize that the referral is both easier to make and has a stronger impact here because the exchange is more "real." They are buying a service, not "donating" to someone's campaign. I know that I choose carefully what campaigns I recommend, but recommending a good service at a discount that also supports something I'm behind?  - no brainer.

To me this is a perfect illustration of the fact that crowdfunding is not a platform. It's a community act, centered around the relevancy, context and quality of a project to a said community - be that community geographical, idealogical or virtual.

Tools are just that: tools. You have to have a good sense of your project, your end goal, and your community in order to decide which tool is best. Because, really, you can make a platform out of two popsicle sticks and some glue if everything else is in place.
Posted by Nicole at 12:47 PM