It's amazing to me how consistently human we humans are. Our active avoidance of what we know to be true. Our ability to create entire industries in search of answers that are as plain as day - if we can just accept them as so. It's amazing to me how this seeps into every aspect of our lives - not just the squishy feely ones but the ones involving hard cold cash. We are so predictable.

Last night, a little after 8pm CST, Brandon Stanton of Humans of New York announced a Hurricane Sandy relief project he put together with tumblr and Indiegogo. 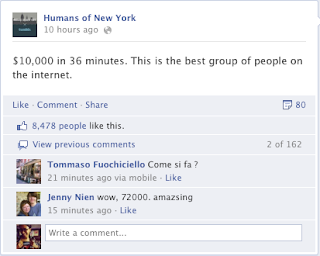 As of 7:30am CST, it's up to $73,500 and counting. They will certainly blow past their $100,000 goal before lunch. The lesson here? Real communities and real relationships have immeasurable value. They are built, not bought, and consistently delivering an honest, interesting and genuine product is a surefire way to build them. And if you've built them honestly, they will gladly and swiftly activate on issues in line with the health and survival of the community.

I have been following Humans of New York on Facebook since May when someone pointed me toward it via a project I work on called St. Louis for the Love. In short, Humans of New York is a photoblog - "the photographic census of NYC. One street portrait at a time" - as the photographer  describes it. But the stories he captures via his lens have attracted a community, and the community's interaction with the photos and the subjects has become an inextricable part of the project. Routinely, he will post a photo on Facebook and within seconds it will have 1,000+ likes. It's. Fascinating. His formula? Being human. Well, his strategy is a little bit more thought out than that, but at its core, it's that simple.

While the photographer stays on mission, there have been a number of stories that have grown out of that focus. In  October, an NYU student with a personal tumblr on self-image ended up on the Today Show because of the discussion that erupted on Humans of New York. 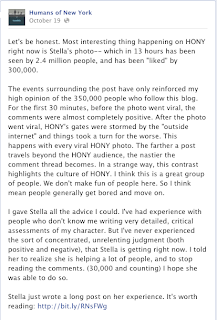 I'll be honest, Humans of New York was one of the places I regularly checked before, during and after Hurricane Sandy. It was a trusted storytelling source dedicated to one of the physical communities of impact with a committed and mostly relevant virtual community (424,000 followers on Facebook) surrounding it. When the fundraising campaign was announced, it was no surprise that Indiegogo and tumblr were on as sponsors and that the charity chosen is a grass roots, family run (but 10-yr old and government endorsed) foundation located in the heart of one of the hardest hit areas (Staten Island). The total is up to $81,000 since two hours ago when I started writing this post.

When these sort of "organic community becomes behemoth and moves mountains" things happen we all tend to be surprised, and agencies everywhere add it to their file of "social media helps humanize your brand!" stories for the next pitch. But there is nothing magic here. No new tools in play, no major partnership, no fancy agency or expensive ad campaign made this happen.

The not-so-secret sauce is that the "brand" (Brandon Stanton) started and grew genuinely and organically, with its community, asking of it little and only when it rose up on its own or when circumstance (natural disaster in the physical location of the project) aligned with community values.

In an age of decentralized and direct-to-consumer media, these are the new table stakes. Brands/products/projects/causes that seek to engage and build relationships have to have the self-awareness and the guts to put themselves somewhat in the hands of the communities they serve. To stop only seeing themselves in their own mirror and open up to how their community is truly interested in them - or maybe not interested in them. And to be open to having a true conversation (read: exchange of ideas - not just "I listened") about how they might grow.