Black History Month: Thumbs up or thumbs down? [Discussions that need to happen]

Today was going to be the day that I left my cellphone in my purse and logged out of Facebook. I have mounting involved and mentally challenging things to cross of my list and multi-tasking was not on the agenda. Just as I went to my Facebook tab to log out, the following ensues on my wall: 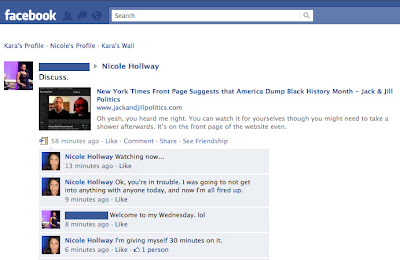 Before you continue, read the blog post she linked to on Jack and Jill Politics here. And make sure you actually go and listen to the referenced Bloggingheads video here.
February is almost over. I almost made it through without having this discussion head on. But as I read the blog post and then actually watched the video in full, it became clear that I was going to have to jump in. I've given myself 30 minutes (now 15) on this, but it's something about which I feel strongly, so here goes.
1. We have to be able to have conversations. I kind of wrote about this in my Beacon blog post yesterday, and even more explicitly earlier this month. We have got to stop shouting from the extreme boundaries of conversations and be willing to get uncomfortable in the gray areas because that is where progress happens. The Jack and Jill Politics post plays the shouting game, not only leaving out any sort of nuance when quoting sound bytes from the video, but by escalating this to be about the NYTimes having an agenda around Black History Month and indicating that the bloggers in the video (John McWhorter of the New Republic and Glenn Loury of Brown University) are sellouts (a whole other powder keg conversation) - "I don’t know where they found these brothers or what they paid them to say this," blog author Jill Tubman says. Unnecessary.
2. McWhorter and Loury speak the truth: People of all colors do roll their eyes at Black History Month. Black History Month does house a set of standard rituals and auto-pilot events that don't really raise, change or challenge the consciousness of the very people it exists to enlighten. They don't so much call for the end of Black History Month (though you can take sound bytes away from the video discussion that would support such a claim), but push us to think about whether or not it is the best way to achieve what those who fought for it wanted to achieve. They are of the opinion that it does not, however they are not dismissing the need to find some way, some new way more appropriate to our current society, to get the same ideas across. To fixate on the fact that they are "calling for the end of Black History Month" and not go on to discuss why, why not and the forces at play is to waste precious time and energy -
3. Because I do think Black History Month is no longer effective. (There! I said it!) I also concede that something is better than nothing. I also understand that different people are at different levels of understanding and that I run in an uncharacteristically open minded circle of people. So what do I suggest instead? I've always been of the opinion that limiting the focus on Black History to a month is by definition marginalizing it (while understanding that some feel that setting aside a month is a needed highlight). A concerted and on-going effort to highlight people of color, achievements and contributions, issues as they effect us today in our daily lives - that to me would be more challenging and have more impact. A good friend of mine and I always talked about re-branding February as a celebration of all races and ethnicities - "February Festival" we called it. Anyone who has seen my Facebook wall knows that it does not have to be February for me to stir the pot and encourage (some would say force :)) discussion on issues of race.
So, while I understand and agree with why Black History Month was created, I am of the opinion that it no longer addresses the issues it set out to tackle. The fact that there's now a month for everything and everyone, to me, only supports this opinion. We tune out, we roll our eyes, we go on auto-pilot.
In short (because now I'm approaching 45 minutes, though I only gave myself 30), everything is contextual. Even "black" history doesn't belong solely to black people. Showing it through a singular lens is to distort it, is to leave out part of the story. This is the history of us - all of us. Coming together and moving forward isn't possible - on any subject or belief - if all the energy goes toward separating things out.
And PS, I'm not asking anyone to agree with me, I'm asking you to talk about it. Because, really - that's what keeps the world going around.
Posted by Nicole at 10:48 AM